A new field in Medicine has emerged due to the discovery of what are now known as voltage sensitive ion channels. Dr. Neher and Dr. Sakman were awarded the Nobel Prize in Science and Medicine in 1991, due to their creation of a patch clamp that could detect and measure the Voltage sensitive ion channels. We provide comprehensive training and certification in this innovative field. 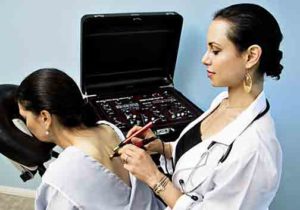 Each living cell is surrounded by a membrane, which separates the world within the cell from its exterior. In this membrane there are channels, through which the cell communicates with its surroundings. These channels consist of single molecules or complexes of molecules and have the ability to allow passage of charged atoms, that is ions. The regulation of ion channels influences the life of the cell and its functions under normal and pathological conditions. These Ion channels allow nutrients in as well as allowing waste products to depart when the cell has the correct membrane potential.

The Nobel Prize in Physiology or Medicine for 1991 is awarded for the discoveries of the function of ion channels. The two German cell physiologists Erwin Neher and Bert Sakmann have together developed a technique that allows the registration of the incredibly small electrical currents (amounting to a Pico ampere – 10-12A) that passes through a single ion channel. The technique is unique in that it records how a single channel molecule alters its shape and in that way, controls the flow of current within a time frame of a few millionths of a second.

The cell uses the membrane potential in several ways. By rapidly opening channels for sodium ions the membrane potential is altered radically within a thousandth of a second. Cells in the nervous system communicate with each other by means of such electrical signals of around a tenth of a volt that rapidly travel along the nerve processes. When they reach the point of contact between two cells – the synapse – they induce the release of a transmitter substance. This substance affects receptors on the target cell, often by opening ion channels. The membrane potential is hereby altered so that the cell is stimulated or inhibited. The nervous system consists of a series of networks each comprised of nerve cells connected by synapses with different functions. New memory traces in the brain are for example created by altering the number of available ion channels in the synapses of a given network.

John Thorp, CEO of Thorp Institute of integrated medicine, has been working with the Electro-Equiscope and it’s preceding technologies for over 33 years. The certification he developed trains technicians in various uses of the Electro-Equiscope including but not limited to specialty probes that address the Acupuncture points of the Ear (Auricular therapy), the Teeth, (Odonton therapy), Reflexology points of the hands and feet, the nerve access points of the spine as well as specialty probes for the lymphatic system.

Electro Toxicology is the gateway to non-drug and noninvasive therapy that allows the body to heal its self in a very accelerated manner. The Electro Equiscope is able to monitor and correct malfunctioning Voltage sensitive ion channels by correcting the membrane potential of the cell.

The clinical protocols developed by John Thorp are now known as Electro-Toxicology Protocols. Electro- Toxicology Protocols are to be used in combination with the Electro-Equiscope.Technicians in training are awarded a certificate of completion, after viewing all online modules. They must also attend at least one quarterly technician training, or private training. Thorp Institute awards the Certification in Electro-Toxicology to the technician or practitioner upon completion of 1000 Electro-Equiscope clinical hours in a licensed practitioner’s office. In addition, Electro-Toxicologist Technicians, are required to complete the Thorp Institute approved courses in the following therapies:

Technicians must also be able to demonstrate proper draping, S.O. A. P. note documentation and ethics, which includes a complete understanding of all HIPPA regulations.

Documentation of the completion of 1,000 hours in the clinical practice setting.

Upon the completion of these approved courses The technician will be awarded the Electro-Toxicologist certification.

We Also Offer Training
To Become An Equiscope Technician